Version 0.7-3 of rClr (source code also on GitHub), a package to access arbitrary .NET code seamlessly in-process, has just been released. The package was first introduced a year and a half ago in another blog post, and you can skim through that prior post to get an overview of the capabilities. This post will summarise newer features. 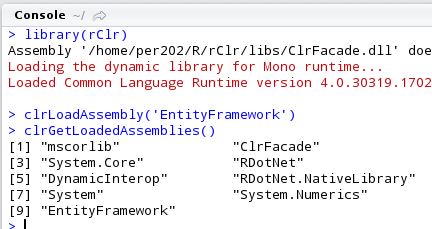 A lot has happened technologically to enable this release. The library R.NET has evolved and been through several rounds of fixes, runtime performance improvements, and refactoring. It is now the prefered subsystem in rClr to handle data conversion, and is active by default.

An overview of the improvements since the release series 0.5.x is:

Some developments are reshaping the landscape of the .NET world. Most of the .NET stack is now being genuinely open sourced. Closer to the R community is the recent announcement of Revolution Analytics joining Microsoft. It is likely that a more open sourced .NET stack will greatly facilitate new features for rClr. I have no insight as to Revolution Analytics, but hope rClr has a role to play and will seek collaboration or advice.

Aside from this changing broader context, some things to tackle are:

A few packages using rClr are publicly accessible, and may be of interest if you want to build your own package with dependencies on rClr.

Excellent post!!! The future of .net application development is on positive note. It offers huge career prospects for talented professionals all over the world. Training on .net technology will ensure good salary package. Best DOT NET Training in Chennai | .NET Course in Chennai

Interesting post! This is really helpful for me. I like it! Thanks for sharing!
Mobile application developers in Chennai | PHP developers Chennai

Is rClr still alive? I'm really struggling to install it. I have R3.4.4 (unsupported?) and I installed Mono (but compiler doesn't seem able to find it). I'm on Windows 10. I have VS2017 CE installed with MVC++ 2017 and C# Tools. Do I need MikTex too? Maybe there is a newer and better way to call C# from R? Thanks.

Informative post indeed, I’ve being in and out reading posts regularly and I see alot of engaging people sharing things and majority of the shared information is very valuable and so, here’s my fine read.